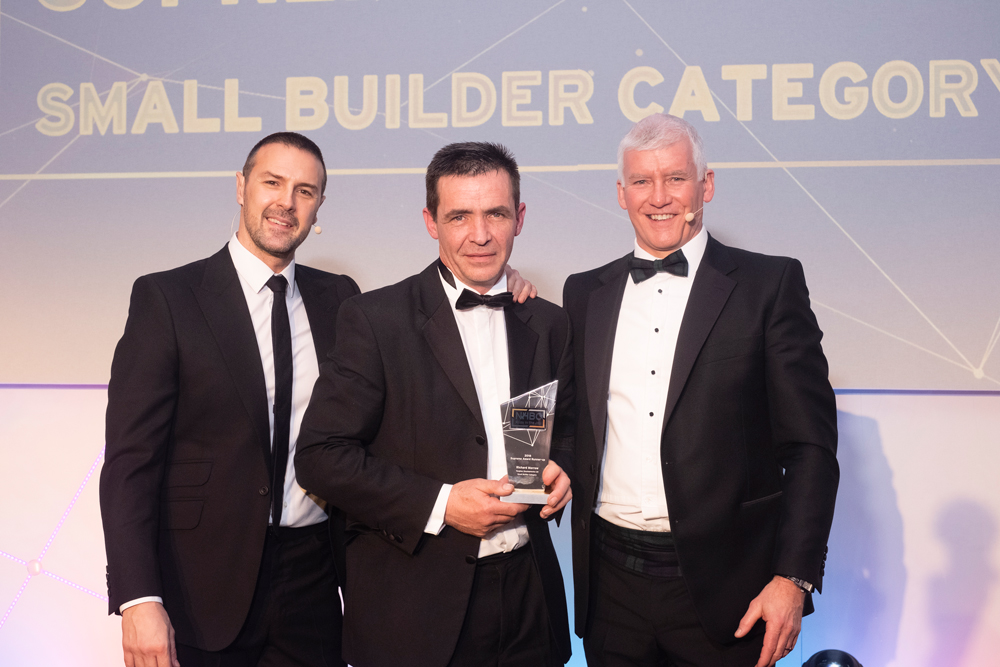 A house building site manager from Vaughan Homes has been named as a Supreme Award runner-up in a prestigious UK competition. Richard Morrow took the runner-up title in the Small Builder category at the UK finals of NHBC Pride in the Job awards held at the Hilton Metropole, London recently. Now in their 38th year, the awards organised by NHBC, the UK’s leading warranty and insurance provider for new homes, are the most highly regarded in the house-building industry. They recognise and reward a site manager’s dedication to achieving the highest standards in house building, and their commitment to building homes of outstanding quality.

NHBC inspectors began judging developments for the current Pride in the Job campaign in July 2017, assessing managers against stringent criteria based on the definitive technical standards laid out by NHBC. Having won his way through three previous stages of the awards in 2018, the Supreme Award winners were announced at a black-tie event hosted by television personality Paddy McGuinness.  Richard is no stranger to winning NHBC Pride in the Job Awards, having claimed a hat-trick of Regional Winner titles. However, this is the first time that he has achieved success on the national stage. Richard, who was recognised for his work on the Hilltops development in Lisburn, said, “I am part of a great team of people at Vaughan Homes, so this award recognises everyone’s hard work on dedication. We are all passionate about what we do and the best part of our job is seeing happy home-owners when we hand over the keys to their new home.” Commenting on the Awards, Steve Wood, NHBC Chief Executive, said,

“NHBC created ‘Pride in the Job’ almost 40 years ago with a clear vision of promoting and driving the very highest standards in new home building for the UK’s homeowners. Now, in 2019, this vision remains as strong as ever and is very much at the heart of the competition and at the centre of everything NHBC does. The site manager’s job is a very important one and undoubtedly one of the toughest and challenging in the entire industry. Congratulations to all of this year’s winners – each accolade is thoroughly deserved.”

Richard’s success is reflective of  the high standards consistently delivered by Vaughan Homes. The company was established in 1985 and, since then, it has gained a reputation for creating properties
of quality and distinction having completed numerous luxury property developments throughout the province.